Long Live the Revolution of The Egyptian People

I can't sleep. My head won't stop and give me a moment to rest. Too many precious moments need to be etched in my memory and I have no time to linger on them.
I feel Like crying, laughing and screaming.
Images are racing by, I need to capture them. Just spit any vague words to remind me of them later. When Mobarak leaves I'll have the time to stop at every image and savor it, for now this has to be enough:

They hit us bad. They shot tear gas at us, I saw ppl running and screaming, and all i can remember is the tweeted instructions " Do not rub ur eyes" I tried, I really tried, but my eyes were on fire, I didn't rub them though but ended up walking blindly into a wall. Then someone carried me up onto a small garden in the middle of Tahrir square, helped me and stayed there to make sure I am ok while bombs were still falling around us. This was 1 of many strangers I would momentarily bond with over the next dew days.

Then they beat everyone up. Total chaos. Rocks, Batoons, Water from fre trucks, I saw many wounded, minor wounds but they shocked me, I didn't know yet that this was nothing compared to what awaits us in the next few days. Amidst all this my dear JarelKamar came running at me, shielded my back with his body and ran with me away from the flying rocks.

A while later I felt more at ease wt all these gases and flying rocks. I came prepared for minor injuries, so I walked around to check if anyone needs help. I tended to a few wounded then came 4 guys running at me, they looked like the kind of guys I would normally avoid in the street for fear of sexual harassment, but they were running for my help, one of them was injured from a rock thrown at him by the police, I helped them with it which was followed by a moment of them cheering me and my gad3ana . This was just so wonderful.
Ofcourse it helped that I had a recent scar on my chin with stitches which they asked me about and to which I laughingly said " I fell at work yesterday, I came to the demo fully prepared wt my own scar" and we laughed together before running again

I walked the streets with men and women, of all sorts of backgrounds. Never have I felt a sense of belonging like then, like now. I was happy just to be in the streets sitting in close proximity with thousands of strangers, snuggled in a warm cocoon, liberating Tahrir square, marking it as ours.

There is much more to tell. Many stories that must be told. I owe it to the people who allowed me to briefly share it with them, but I am really exhausted now.

Around me, friends are sleeping on couches, on the floor, in any empty space they can find.
I call them friends eventhough half of them I've never met before this week, but so many things happened, together we shared intensely charged emotional days that we became friends rapidly.
Yesterday I was terrified, I was freaked out like never before. I was shaking in bed trying to convince myself to sleep. I actually thought of writing a note and posting it on my fridge incase I died. Now I feel elated.
I have lived to see the uprise of the Egyptian people and the downfall of Mobarak . I can dream about having kids and me telling them proudly that I was part of this extraordinary moment.


This is my place. 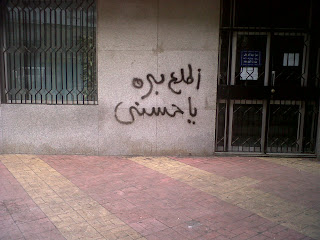 These are my people, 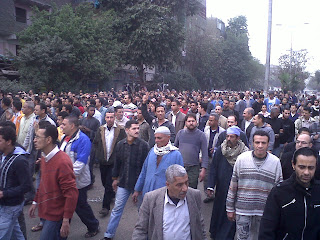 and we just seized our country back. 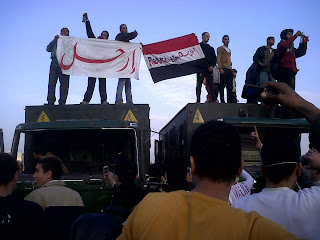 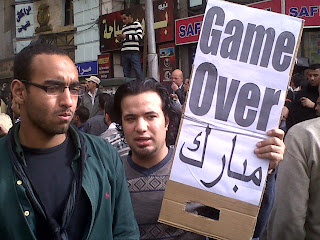 Long Live the Revolution of The Egyptian People

Help needed from the Ministry of Health, the Red Crescent and Armed Forces:

Essential medicine and medical aids are needed to cure injured people from the protests. They are running out of hospitals and pharmacies. Please provide them to save lives of injured people.
مرسلة بواسطة monasosh في ٨:٠٩ م هناك ٥ تعليقات: 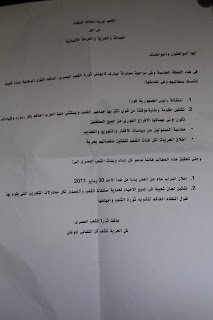 The People Demand the Overthrow of the Regime
for Dignity, Freedom, Social Justice Fellow Citizens,
In this critical time and to confront Mubarak's efforts to abort the revolution of the Egyptian People. We – the political Forces – call on our fellow citizens to hold on to their demands and in its forefront:
1- the resignation of the president
2- Forming a Temporary Government from forces trustworthy by the people that excludes members of NDP with all its figures and leaders, its first job being the immediate release of all political detainees.
3- Taking those responsible for the policies that impoverish and torture
4- Freedom for all sectors of the population to form their own free organizations
And until realizing these demands we call on all our fellow citizens to:
1- Announcing a general strike starting tomorrow Sunday 30 January 2011
2- Forming popular committees in all neighborhoods to protect the assets of the people against all destruction administered by the dying regime to deform and abort the revolution of the people
Long Live the Revolution of The Egyption People All the Freedom to the People .. All the Loyalty to the Nation
مرسلة بواسطة monasosh في ٧:٥١ م هناك تعليق واحد:

For years i had one gang of friends that are like family to me.
They've been part of my life for many many years, We've lived many lives together, We were together at times of happiness, embarrassment, pain, farewells. We've seen many things together that now it seems the natural thing to do to share with them  my most treasured thoughts and events.
When I was leaving the one guy I really loved, knowing they were there gave me strength to hold on to my decision despite the pain and confusion.
We grew up together. We fought, we yelled, we laughed, we danced. We danced alot, and laughed alot.
Since 2000 we celebrated every new year's eve together. But as we grew up, it got harder for all of us to gather. Some were abroad to study, and some traveled alot with their work.
This new year's eve however was different. Amr was back from France. Emzo, Dj and Basma came from Uk. Kerstin and Nora came from Germany.
True we weren't all there, we were still missing some, but still this kind of gathering didn't happen in a long time. So this new year's eve was special, and we were all excited about it.
And it was great. One big bubble of happiness, music and childhood memories. I was lost in warmth and an enormous gratitude for life. And when this song started to play, we hugged each other, jumped together as we loudly sang:
" Dancing in the moonlight
Singing in the rain
Oh, it's good to be back home again
Laughing in the sunlight
Running down the lane
Oh, it's good to be back home again"
مرسلة بواسطة monasosh في ٤:٥٥ م ليست هناك تعليقات: 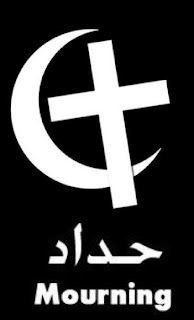 January the 7th of last year, originally a festive day for Egyptian Copts was smeared with blood and darkness. This year, new year's eve was killed for them as well. Seems like everything beautiful in this country is dying.
مرسلة بواسطة monasosh في ٢:٣٢ م ليست هناك تعليقات: